Soleimani has been nicknamed by Western media sources as the Shadow Commander because of his clandestine military operations, his behind-the-scenes political achievements in Iraq, and his inconspicuous demeanor. In spite of maintaining a low profile, Soleimani has been an essential force behind strengthening and directing Hezbollah, and shaping the post-war political landscape in Iraq. Soleimani also masterminded the strategy that helped Bashar al-Assad turn the tide against opposition forces in the Syrian Civil War—recapturing key strategic positions, towns, and cities from rebel factions. He contained the expansion of the Islamic State in Iraq in the Iranian-led intervention.

He is designated by the United States government as a “terrorist” and has been the target of several sanctions by various intergovernmental organizations and countries. He has been described as being both hated and admired by his adversaries and was notably called “a living martyr” by Ali Khamenei—the Supreme Leader of Iran. Soleimani’s prominent career has spanned over a third of a century, where he has held commands in a plethora of wars and conflics stretching across the entire region.

Early life and education
Soleimani was born 12 March 1957 in the village Rabor in the province of Kerman, and his father was a peasant. He has a high school education. In his early years, he worked as a contractor for the Kerman Water organization. When not at work, he spent his time lifting weights in local gyms and attending the sermons of a traveling preacher by the name of Hojjat Kamyab – a protege of Ayatollah Khomeini.

Career and activities
“I see (Gen. Soleimani) as sort of the evil genius behind all of the activities that Qods Force has done, all the expansion of Iranian influence”

—Richard Clarke, counter-terrorism czar for Presidents Bill Clinton and George W. Bush
Lightly bearded, 55 years old and often wearing a collarless business shirt or military uniform, Gen. Soleimani has a calm presence about him, according to people who have met him. American and British intelligence officials draw comparisons between the real-life Iranian general and the fictional Soviet spymaster Karla, of John le Carre’s Cold War novels. Global chess masters both, their goal is to blunt U.S. advances while aligning with Washington’s adversaries. Soleimani joined the Revolutionary Guard (IRGC) in 1979 following the fall of the Shah of Iran to the Ayatollah Khomeini. Reportedly, his training was minimal, but he advanced rapidly. Early in his career as a guardsman, he was stationed in northwestern Iran and helped crush a Kurdish uprising.

On 22 September 1980, when Saddam Hussein invaded Iran, Soleimani was a lieutenant in the ranks of the IRGC. During the war, from 1980 to 1988, he was stationed at the south front, commanding the Forty-First Tharallah Division while still in his 20s. He is considered a hero of the war by some war veterans.

Suleimani is a practical man with proven problem solving skills characteristic of a tactical leader. Opensource materials also depict him as a commander who developed tactical military skills early based on his own experiences, which he seems to place more faith in than the orders of his superiors. On July 17, 1985, Suleimani opposed the IRGC leadership’s plan to deploy forces to two islands in western Arvandroud (Shatt al-Arab). Suleimani argued, “Taking the islands would be easy,but remaining there would be impossible. In addition to this, during retreat we will be leaving large troops behind”. While other equally critical commanders retracted their positions, Suleimani maintained his stance and the plan was abandoned. This incident may have been a formative moment in his career, which reinforced his stubbornness and nurtured an unwillingness to take others’ views into consideration.

After the war, during the 1990s, he was an IRGC commander in Kerman. In this border region of Afghanistan where opium trade travels to Turkey and onto Europe, Soleimani’s military experience helped him earn a reputation as a successful fighter against drug trafficking.

During the 1999 student revolt in Tehran, Soleiman was one of 24. IRGC officers who signed a letter to President Mohammad Khatami. The letter stated that “Our patience has run out,” and said that if Khatami did not crush the student rebellion the military would, and might also launch a coup against Khatami.

Command of Quds Force
The exact date of his appointment as commander of the IRGC Special Forces – the Quds Force (“Jerusalem Brigade”) is not clear, but Ali Alfoneh cites it as between 10 September 1997 and 21 March 1998. He was considered one of the possible successors to the post of commander of the IRGC, when General Yahya Rahim Safavi left this post in 2007. In 2008, he led a group of Iranian investigators looking into the death of Imad Mughniyah. Suleimani helped arrange a ceasefire between the Iraqi Army and Mahdi Army in March 2008.

Following the Twin Tower attacks of September 11, 2001, Ryan Crocker, a senior State Department official in the United States, flew to Geneva to meet with Iranian diplomats who were under the direction of Soleimani with the purpose of collaborating to destroy the Taliban, which had targeted Shia Afghanis. This collaboration was instrumental in defining the targets of bombing operations in Afghanistan and in capturing key Al Qaeda operatives, but abruptly ended in January, 2002, when George W Bush named Iran as part of the “Axis of evil” in his State of the Union address.

On 24 January 2011, Soleimani was promoted to major general by Supreme Leader Ali Khamenei. Khamenei is described as having a close relationship with him, helping him financially and has called Soleimani a “living martyr”.

Soleimani has been described as “the single most powerful operative in the Middle East today” and the principal military strategist and tactician in Iran’s effort to combat Western-Israeli influence and promote the expansion of Shiite & Iranian influence throughout the Middle East.  Geneive Abdo has called him a “brilliant tactician”. In Iraq, as the commander of the Quds force, he is believed to have engineered the Iraqi coalition government in its current form, supporting the election of Iraqi Prime Minister Nuri Al-Maliki.

According to some sources, Soleimani is the principal leader and architect of the military wing of the Lebanese Shia party Hezbollah since his appointment as Quds commander in 1998.

A map of Al-Qusayr and its environs. The operation to take this strategically crucial town was allegedly masterminded by Suleimani
According to several sources, including Riad Hijab, a former Syrian premier who defected in August 2012, he is also one of the staunchest supporters of the Syrian regime of Bashar Al-Assad in the Syrian civil war. In the later half of 2012, Soleimani assumed personal control of the Iranian intervention in the Syrian civil war, when Iranians became deeply concerned about the Assad regime’s lack of ability to fight the opposition, and the fallout to the Islamic Republic if the Syrian regime fell. In Damascus he is reported to be coordinating the war from a base in Damascus at which a Lebanese Hezbollah commander and an Iraqi Shiite militia coordinator have been mobilized, in addition to Syrian and Iranian officers. Brigadier General Hossein Hamadani, the Basij’s former deputy commander helps to run irregular militias that the Soleimani hope to continue the fight if Assad falls. Under Soleimani the command has “coördinated attacks, trained militias, and set up an elaborate system to monitor rebel communications”. According to a Middle Eastern security official Dexter Filkins talked to, thousands of Quds Force and Iraqi Shiite militiamen in Syria are “spread out across the entire country.” The retaking of Qusayr in May 2013 from Syrian rebels was, according to John Maguire, a former CIA officer in Iraq, “orchestrated” by Soleimani and “a great victory for him.”

He is widely credited with delivering the strategy that has helped President Bashar al-Assad turn the tide against rebel forces and recapture key cities and towns. The details of his involvement however are little known but many events from the training of government allied militias and coordination of decisive military offensives to the sighting of Iranian UAVs & spy-drones in Syria, strongly suggest that his command (the Qods force) are heavily involved in many aspects of the civil war.

The east of Saladin Province in Iraq where Qasem Soleimani was involved in breaking the Siege of Amirli by ISIS
Qassem Soleimani was in the Iraqi city of Amerli, to work with the Iraqi forces to push back militants from ISIS. According to The Los Angeles Times, which reported that Amerli was the first town to successfully withstand an ISIS invasion, it was secured thanks to “an unusual partnership of Iraqi and Kurdish soldiers, Iranian-backed Shiite militias and U.S. warplanes”. The US acted as a force multiplier for a number of Iranian-backed arm groups — at the same time that the head of the Revolutionary Guard’s foreign operations was present on the battlefield.

A senior Iraqi official told the BBC that when the city of Mosul fell, the rapid reaction of Iran, rather than American bombing, was what prevented a more widespread collapse. Qasem Soleimani also seems to have been instrumental in planning the operation to relieve Amirli in Saladin province where ISIS had laid siege to an important city.  In fact the Qods force operatives under Soleimani’s command seem to have been deeply involved with not only the Iraqi army and Shi’ite militias but also the Kurdish in the battle of Amirli, not only providing liaisons for intelligence sharing but also the supply of arms and munitions in addition to “providing expertise”.

In Operation Ashura, he was reportedly “present on the battlefield”. Militia commanders, who spoke on condition of anonymity because they are not authorized to talk to the media, describe Soleimani as “fearless” — one pointing out that the Iranian general never wears a flak jacket, even on the front lines.

Sanctions
In March 2007, Soleimani was included on a list of Iranian individuals targeted with sanctions in United Nations Security Council Resolution 1747. On 18 May 2011, he was sanctioned again by the United States along with Syrian president Bashar Assad and other senior Syrian officials due to his alleged involvement in providing material support to the Syrian regime.

On 24 June 2011, the Official Journal of the European Union said the three Iranian Revolutionary Guard members now subject to sanctions had been “providing equipment and support to help the Syrian regime suppress protests in Syria”. The Iranians added to the EU sanctions list were two Revolutionary Guard commanders, Soleimani, Mohammad Ali Jafari, and the Guard’s deputy commander for intelligence, Hossein Taeb. Soleimani was also sanctioned by the Swiss government in September 2011 due to the same grounds cited by the European Union.

He is listed by the United States as a terrorist, which forbids U.S. citizens from doing business with him. The list, published in the EU’s Official Journal on 24 June 2011, also includes a Syrian property firm, an investment fund and two other enterprises accused of funding Assad’s government. The list also includes Mohammad Ali Jafari and Hossein Taeb. 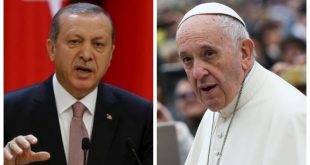 ISTANBUL: Turkey on Monday urged Pope Francis to join Ankara in rallying the world to …